…..is all about making choices, some better than others!

Now, I don’t want anyone to feel sorry for me, because I’ve been on holiday for a week in the sun, but during that time I’ve been trying to dodge the various ways wheat has been presented to me.  I haven’t always succeeded, I’ve been a bit stupid and I’ve suffered the consequences.

We love going to Mallorca in the school October break.  The big draws for me and my wife are not having to go to work (yeah, really), clean, organise the children’s social lives and cook.  For the kids, it’s the sun, the beach, swimming in the sea, ice cream and going to restaurants (a big treat).  Eating out is one of life’s greatest pleasures and the various restaurants in Puerto de Pollenca are fabulous.  As someone trying to reduce or remove his symptoms of rheumatoid arthritis with diet, I can avoid dairy easily.  Trying not to have wheat, on the other hand, has been a bit more difficult than I thought because it’s everywhere!

I’m writing this on the flight home.  At the moment, I am nursing a swollen index finger on my right hand, a sore right wrist, the bursa on my left wrist is a bit painful, I have swollen and sore feet, a painful right ankle and my right elbow (the barometer) is playing up.

Sounds like I’ve had a great holiday, eh?  Well, I have.  I’ve learned a few things as well, which is excellent!

I’m also playing at a party tonight.  We have a dash up the A1 from Newcastle, drop the wife and kids, then it’s off to the gig.  My band mates have come to my rescue (thank you Marky Mark) and have all of my gear, so I just have to pitch up.  With the state of my joints right now, tonight should be interesting and I’m a little worried!

But I’ve been here before.  I had a vicious flare up 7 years ago when I stopped responding to treatment and spent 2 years in and out of consulting rooms and trying different drugs to find something that worked.  I was a difficult case, resistant to some of the commonly used drugs.  I lost weight, I found walking difficult, I had constant, severe pain in most of my joints, I had trouble sleeping, my family, friends and work colleagues all looked at me with worried expressions as they could see I was in trouble.

I’m a drummer in a band playing at people’s parties – important events.  There’s a code, you don’t let people down.  It’s the ‘show must go on’ thing.  I continued to play throughout this flare up, only having to cancel one gig and only then because I was an inpatient receiving some much-needed bed rest.  I found drumming quite liberating, but I was exhausted after every gig and completely unable to tear down my gear.  My band mates, again, came to my rescue.

My consultants (I had 2 by this point) eventually found a combination of three drugs that worked a treat, but they gave me crippling indigestion so that was just no good.  Methotrexate was next, worked a bit but worked better when delivered by subcutaneous injection.  Anti TNF drugs came next.  Etanercept didn’t work but Adilamumab (Humira) did.  Within 4 hours of my first injection, I felt a noticeable benefit.

So that was me.  Self medicating with Methotrexate and Humira injections every month.  Over the course of the next 12 months, the dose of Methotrexate increased as did the frequency of both drugs, to once a week.  There they stayed until September 2011, when I started to think differently about what I was eating and I have been experimenting since.

So, what of this recent week of experimenting with food?

I love fish.  Eating in a place by the sea means that there’s always fresh fish on the menu.  But it’s not as simple as just grilling a fish, as we will find out.  Here are my good choices…

…and here are my bad choices… 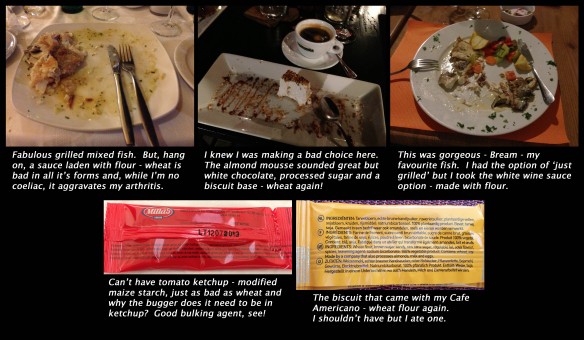 …and here are the consequences…

As well as the above, I have sore feet, which is really poor show.  I hate having sore feet.  Standing and walking on sore feet is just crap, as anyone with sore feet will tell you.

Why?  Wheat is the thing that kills me and my feet.  I can stand (no pun intended) a little bit of dairy, but not much.  Wheat, on the other hand, is little more than poison.  Harsh, you think?  Wheat is the core of our system of nutrition, it is grown all over the world, it makes ‘our daily bread,’ it’s a major component of processed food and it’s in more things than you realise.  It is, quite literally, everywhere.

Wheat makes us fat, it contributes to the growth in obesity and diabetes, it inflames our guts, it hurts our organs, it makes approximately 40% of the human race ill in some way.  Yet we are encouraged to eat, eat and eat more whole grains!  We are killing ourselves slowly and, in people like me who have autoimmune problems, it is the thing that makes the difference between being well and being very ill.

Now, you probably think I’m completely mental.  I’m currently reading a very interesting book about the effects of wheat.  And, I have been experimenting with food for over a year now.  I know what makes my symptoms flare and it’s all things wheat.

Well, I’m off to be clean for a month.  I’m not going to spend that time in a bath – I’m going to do what I should have done this last week, make some good choices, which will cleanse my gut and make me well again!  I’ll keep you up to date with where these choices lead.

The wheat story hasn’t gone away, though, it’ll run and run.