This post was going to be called “Man Boobs No More”, but I changed my mind at the last minute.  I will, however, come on to my man boobs later.

Er……oops, that could be read a number of ways!  What I mean is, I will refer to the subject of my man boobs a bit later on.

I’ve been feeling a wee bit guilty about not writing.  I do love writing my blog and I was VERY surprised to find that my last post was in May last year.  Last year, 2013!  I would say, in my defence, that life has been awfully busy in the last 8 months or so.

So, what has happened?

Well, first of all I left one band and joined 2 others.  This meant getting down to quite a punishing rehearsal schedule and, in total, I had to learn around 50 new songs and be gig ready pretty quickly.  In the last 8 months, I’ve been in more random rehearsal spaces and done more music stuff than I can shake a stick at. 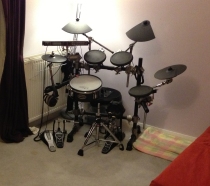 It has also meant a lot of practise on my wee electronic kit at home, which is supposed to be the quietest way to get some practise in.  I still manage to disturb everyone in the house, though!

Then we had our summer family holiday in France, which was awesome.  I’ll get to that in a moment.

Then after months of delays, we were finally granted permission to extend the house.  We appointed a builder and the work started.  This introduced a load more distractions in the 10 weeks that followed.  The build was finished on the 20th of December, so Christmas brought new bedrooms for the kids, BUT, it still isn’t completely furnished or decorated and there is still some internal work to do (which is my job) so I have a few more distractions.

With all this going on, could I have found a couple of hours to write some stuff for my blog?  Yes, of course I could but I kept putting it off.

Then, this week, I received a reminder that my blog was due for renewal.  So I logged on and found a message from a fellow arthritic dated July 2013.  I hadn’t seen it.  Now, I make a point of replying to everyone who gets in touch via the blog, so I felt really bad that I had failed this time – and that it was from so long ago.

Closing her message, Sue wrote, “Please do keep posting.  Your blogs are incredibly helpful and inspiring.”  I suddenly remembered why I started this thing in the first place and felt quite humbled, so thank you Sue for giving me a wake up call.  And thanks also to Jono (my wife’s cousin’s husband) for telling Sue about my blog.

Right.  The last time I blogged I had reached the point of no return and had felt the need to take my medication.  This has happened twice since then and I seem to have settled into taking the drugs every 3 months.  I still haven’t had the courage to sit through one of these ‘mini flare ups’ and see if my joints settle down.  I get a bit scared.

I know that, at some point, I will have to try powering through these tough times but life just gets in the way.  There is always family stuff to do, my job, a rehearsal, a gig, stuff to do around the house and a whole bunch of other stuff that demands attention and action.

And, let’s not lie about it, it’s bloody painful.  I lose all the strength in my limbs, I have no power in my hands, even to the point of struggling with cuff links and not being able to turn down my shirt collar.  I have trouble with stairs and my ankles and feet are sometimes too painful to carry my weight.  Enough really is enough when you have to ask your daughter to help you get dressed.  So, I give in, inject, and within days I’m feeling better.  Whether I would feel better anyway without taking the drugs is something I’m just going to have to think about trying – but I really am a bit of a scaredy-cat.

But, I could be helping myself a bit more.  Since France, I’ve been in and out of eating clean and I have the results to show for it – this is the Sweets and Swelling bit.

I know that eating wheat is bad for me.  I have an immediate reaction to it and it’s not pleasant.  Everyone should read a book called Wheat Belly – everyone!  Anyway, at a very nice restaurant in the tiny French village of St Avit Senieur, I ordered a pudding which was lovely but made with flour.  The kids told me off.  My wife shot me a disapproving look.  I knew what I was doing.  I had a leaky gut for a couple of days after that.  I stay away from wheat.

Processed sugar also has a very bad affect on me and I’m finding more and more that the longer I stay away from processed stuff, the more extreme the reaction when it gets into my diet.  I don’t have much willpower.  My colleagues at work will tell you, if there are ever sweets on our desks and I have one, you can kiss goodbye to the rest because I’ll have the lot.  I fall off the wagon now and then. 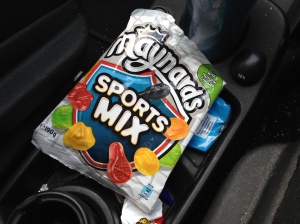 When this happens, I’ll drop into Sainsbury’s or Tesco on the way home and pick up a bag of Sports Mix – they’re my favourite.  Give me 10 minutes and they’ll all be gone.

I’m just a sucker for them.

In the last few days, my wife has been at a networking event for people from her industry.  There were bowls of sweets on the tables and, because her friends and colleagues know we have 3 kids, she kept being given sweets to bring home for them.  We ended up with tons and tons of sweets and they were all like this, just processed sugar on a stick.

For me, that’s a red rag to a bull and I ate quite a lot.  The result, crippling, painful swollen fingers and eczema.

Sugar really is nasty stuff.  Here are the results of my lack of willpower.  A beautifully swollen pinky joint and the nastiest eczema breakout I’ve had in ages.  If I stay clean, the condition of my skin is amazing.  If I don’t, this happens.

So, that was today, Thursday 6th February.  Give it a few days and my joints and skin will be back to normal.  Sugar really is poison and we should all stay away from it.

So, I’ve covered Sweets and Swelling.  What about Selfies?  Back to France.

Our holiday in France was amazing for so many different reasons.  We had a beautiful villa with a private pool, the weather was superb, the people were lovely, the little bastide towns were gorgeous, the countryside was beautiful and we discovered that the Dordogne is one of the most fabulous parts of the world.

I did what I always do.  Completely in love with the place, I was in a fantasy, talking about buying a farmhouse, selling up and retiring there and I slowed the car at every ‘for sale’ sign we passed.  All nonsense, of course, but great to let one’s imagination wander.

The food was a big surprise.  I found that I had a huge choice.  Ordering in restaurants was easy.  I did make a few poor choices, but I knew what I was doing and anyway, the kids let me know about it so I was shamed mercilessly.  For the most part, I was able to eat like a horse!  When in France……

Anyway, here are some of the things we ate.  Lots of meat, lots of veg, lots of fruit, just what paleo man would eat.

We ate a lot of food – everyone did.  But, it was all good stuff.  We had a large cooked breakfast every morning, we drank LOADS of the local wine and ate a big lunch and dinner.  The entire holiday was really just hopping from one eatery to another, but, I have never felt so good and I actually came home 2.2 kilos lighter than I was before the holiday.

When does that ever happen?  People who lose weight on holiday normally have a dose of the squits or some other tummy troubles.  I caught myself in the mirror having a shave one morning and I thought to myself, “Blimey, you don’t look too bad”.  Following in my eldest daughter’s footsteps, I reached for my phone a took a selfie. 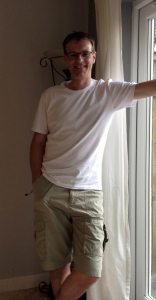 With Twitter and Instagram at her fingertips, Catherine is definitely one of the selfie generation and we’re always trying to give her good advice, trying to keep her safe and generally giving her a hard time about it.  So, here’s me not taking my own advice, with clothes and without. 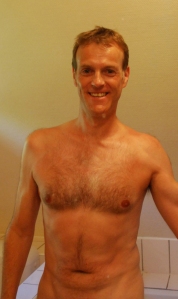 I think I look OK for a 47 year old chronic arthritic who takes little to no exercise.  This is all diet, nothing else.

Which brings me to my man boobs.  3 years ago, I was growing a pair.  Now they’ve gone.  I’ve done nothing except change what I eat.  Aside from a few misguided lapses of willpower, I have kept my diet as clean as I can and I’m now at a steady 73 kilos, just perfect for my height.  My BMI is smack bang in the middle of normal.

3 years ago, my BMI put me in the overweight category.  Not now.  Even better, I know that I can control my arthritis with food.  I know what works and what doesn’t.  I’ve moved on from constantly experimenting – I don’t feel I have to do that any more.  I just have to do better and stay clean.  Maybe I can still be free from the drugs completely.